My last and final post on the BEST day of my life.

I wanted to make it just as special for Jimbob , as the groom often gets forgotten and he’s happy to sit back and roll with it.
Jimbob had been such a jem(ironic that’s his initials) so in the run upto the wedding I planned surprises that would all make his day! 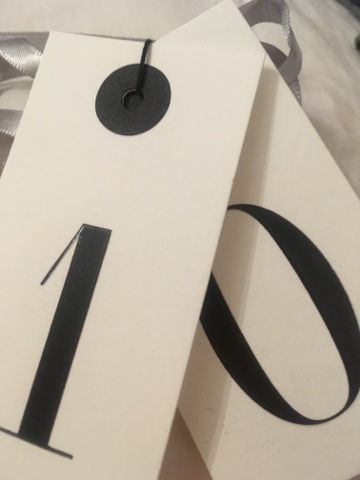 1.When he awoke in the hotel, I had asked Will his best man to give him a photograph. It was one I had taken prior in a homemade boudoir shoot. I simply wrote on the back ‘your last single girl’
2. Following that, I had wrapped a beautiful bottle of whiskey and asked the hotel to have it on the breakfast table for him. A simple tag ‘to Carm your Nerves’

3. I knew that J would have to return to the room before he left for the church so I asked if the hotel could again step in and deliver one small item. Jimbob loves Braeburn apples(not sure why) he had one everyday at lunch when we first got together. And when we looked for a ‘tree’ I would of loved an apple tree because they flower in the September. So when he returned back to his room. I had a baby apple tree waiting. The card read ‘Let this be the start of something fruitful’.

4. I had previously bought him some Calvin’s for the wedding well I went one better and got them embodiered with the date. The tag read, ‘so you never forget’.
At this point he thought that was my groom gifts. Boy was he wrong.
5. After we left to church we moved onto the reception; we had previously spoken about having a pionist, J loved the idea, but in an effort to save money he dropped the idea. Then I hired him behind his back. He was thrilled that as he walked in Matthew was there playing. The number 5 tag lay ontop of the piano. ‘To keep you entertained’
6. We were announced into the room and my Groom gift lie in wait. An envelope containing plane tickets and small itinerary of a couple of days in Dublin. At the bottom of the itinerary ‘Come away with me’.
7. After dinner coffee was served, with J favouite peanut butter cuts(mini ones). ‘Your favourite for my favourite’
8. Cutting of the cake, he was expecting traditional fruitcake, well I had that swapped it to his number one cake Red Velvet, he instantly knew well it is red!! ‘Surprise’
9. When the evening was in full swing I asked William to step up again. He gave him a cigar in a small box ‘Hubby & My my new little brother please enjoy’.
10. Partly to knock another of the bucket list and there never felt a more appropriate time. I asked the hotel to assist. And they covered the bed in rose petals. It really was the perfect way to end our day.
It was so important for me that Jimbob had the best day, people say it’s all about the bride, he’s happy if your happy. That it’s probably true but a few surprise make him really feel special.
I hope this wee list has made you think how you can make his day special