Skip to content
Good morning All,
I wanted to talk about bridesmaids gifts for a minute. Now I have read a lot of posts and forums about this topic and in all honesty I feel some brides get it a little wrong. And I’ll tell you why. So many are caught up creating this beautiful box of stuff as a gift for the 6 bridesmaids they don’t stop to think do they actually want this glass that says “bridesmaid” on the base, because they’ve been a bridemaid a few times before, has someone already done this?
One thing to spend money on is something for the day. I bought little tiny necklaces from etsy with a single lower case inital. It’s cute, it’s jewellery, it’s hopefully something they would want to wear again. And for while they’re getting ready, we bought big boyfriend shirts and I had them embroidered with a little monogram. 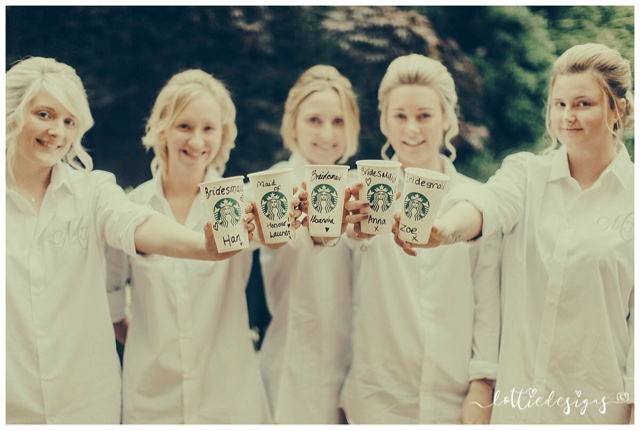 So going back to my original comment, a survival pack is cute and fun and something they may get use of throughout the day, or even into the day after, but tat, cups, mugs etc will just sit on a shelf. I think if you are so set on getting your bridesmaid something to say thank you, go more personal. Yes it’s more difficult, but also more thoughtful. I did this too, mainly because they had been so kind as to join me on a girls holiday in Ibiza and one of them even made all 5 bridesmaids outfits. I didn’t think a small silver necklace really showed my appreciation for how much they had invested in the wedding, both physically and financially. And I think that’s another point to mention, if you have bridesmaids who aren’t earning the title what are they being thanked for?
I believe when you sign up to being a bridesmaid for someone there are certain things you should do or at least attempt to do. I believe this because I know for whoever would ask me, I would want to give them the best run up to their wedding imaginable. So if your bridesmaids not pulling their weight, say something. Don’t go all ‘Maria Carey’ on them but sit down and state your feelings.
Being a bridemaid is an honour. You are making a life time commitment to someone and you want people who will support your heart ache when your dress doesn’t fit on your third fitting. You want someone to hold your hand when things are going right. And more importantly you want someone to take you to the disabled toilet becuase you can’t find the toilet seat on your own.
A bridesmaid gift I my eyes should be personal to the two of you, for example my oldest friend Al (Alexandra) introduced me to straighteners but in the process of having my first straighten, her step mum burnt the top of my ear, it’s something I’ll never forget and always laugh about. So it seemed only fitting to buy her a pair of straighteners. It something that she may not of needed right then and there but something that might come in handy when her old pair gives up.
You could if your struggling just work out what they’d really want. Like my friend Zo (Zoe). She bloody loves Harry Potter, so I bought her two tickets to Harry Potter World. It was somewhere she really wanted to go. And it meant that she got something she really wanted.
I hope you haven’t found this post too preachy, but just a little bit of a nudge in a more personal direction.
Cx