Skip to content
Hi All,
Yes I’m still talking Christmas and you’ll either love it or hate it but I’m sticking with it because I can! Plus there’s a few things that you might enjoy all year long.
On the 16th December I had my girlfriends over for a Christmas catch up and a little gift from me to them. We’re so busy and it was great to make time and be together, just for a change.
This afternoon was a little bit of a logistical nightmare. I had planned it perfectly (so I thought) but was forgetting we had a wedding the day before, so my prep time needed to be moved just a little so I wasn’t rushing on the day. I wanted to enjoy my time, not be in the kitchen faffing…because where’s the hosting skills?!
So what did I have in store….
Menu
French Onion Soup with a mini Cheese Toastie
Turkey & Stuffing Sandwich
Ricotta Filo Cups
Goats Cheese, Pear & Rocket Parcels
Pineapple Vodka Panna Cotta
Mini Chocolate Velvet Torte
Gingerbread Fudge
Christmas Biscuits
Cherry Scones with Raspberry Jam & Clotted Cream
The weekend before I got my prep on and made my French Onion Soup, it’s super easy to prepare.
We had a Turkey Parcel from aldi on Sunday so I saved some of the turkey and froze it ready for the event. And just a note the Turkey Parcel was delish and not dry for those interested!
On Thursday evening in between a blow dry I got most of the elements together.
The Panna Cotta, which was meant to be Limoncello but I couldn’t find it anywhere so became Pineapple Vodka, I used a Good Housekeeping Recipe but swapped the spirits and it was really easy to put together. I knew they would set nicely over the next day or so…no prep on the day job. I pulled the turkey out to defrost to so one less thing to think about.
The fudge which I have never made before was super easy to make thanks to this lady, and she is right; don’t over mix! It took over a day to set properly but it was worth it with my tree cutters.
The Christmas Biscuits, like literally the easiest biscuits I have ever made because they didn’t end up one massive biscuits. The dough is very dry so don’t be alarmed and baking time for me was 11 minutes. Recipe here. 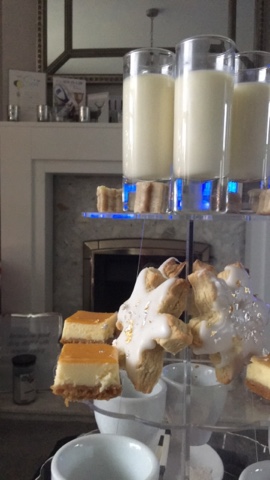 Lastly I put together a Mary Berry Chocolate torte. It didn’t turn out anything like I wanted and the less said about that the better!
On the day I was totally freaking out about having to make a cheesecake and an additional savory element so I bobbed in to Tescos(I am sorry-It was a god send in the end) to get ricotta and red onion filo cups and Sicilian Lemon Cheesecakes.
When I got home I put together my Parma ham with pear and goats cheese- no cooking required just smear a good dollop of goats cheese onto the ham and add a bite size chunk of pear and roll. Done.
The last thing to assemble was my Turkey butties. I tried to be all posh and made mini finger sandwiches with turkey, stuffing, cranberry sauce and a smidge of mayo. #yum
After everything was made all I had to do was assemble onto my stand and serve. 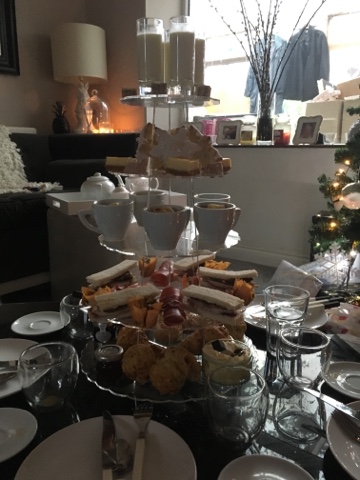 And what an afternoon we had, we sat for 4 hours round my coffee table in the living room infront of the fire laughing and joking, it was a great way to start the festive season.
I hope this post encourages all people to consider something later this year.
Cx